New members of the family. 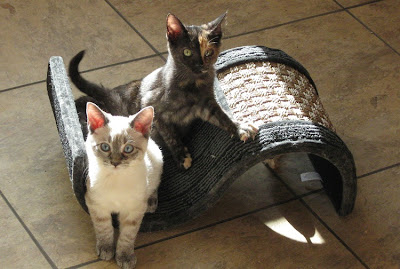 After a year of sporadic begging we were able to finally adopt two kittens!

We went to the Kitsap Humane Society during a free adoption sale. (saved about $300!) There were kittens everywhere. Most were adopted or weren't ready to be adopted yet.

We spotted these two lovelies in a cage together, and they were the only kittens that were playing and wrestling. We wanted playful kittens, and I loved how the tortoise kitten had a half black and half orange face. We just had to have them. Unfortunately they needed to get surgery (spayed) before we could take them home so we had to wait a whole weekend for them.

I could go on and on, but in summary: they are so very cute and playful and "melty" I'm sure I'll post many pictures of them in the future. <3
Posted by Green Subjective at 6:21 PM No comments:

There is a Winner!

We have a winner for the recent My Memories Suite Scrapbooking Software Giveaway I hosted.

Congratulations to Teresa from POP embroidery!!!

I hope you have an amazingly fun time trying out the software. Beware - it's addicting!
Posted by Green Subjective at 8:38 PM 2 comments:

Inspiration Behind the Piece: Celestial Watch 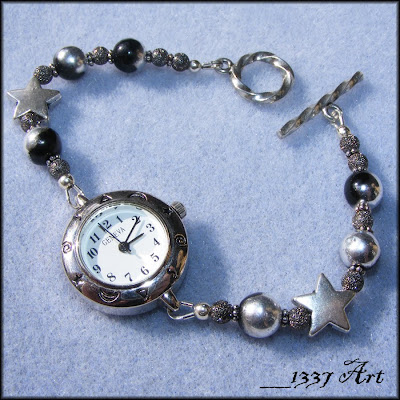 There is something calming about the night sky with the moon and stars hanging in balance in all of the nothingness that is the universe.

I created this Celestial Watch in different stages. I first found the watch face and bought the star beads to match it. I knew I wanted to use black and silver and eventually found the perfect beads. They are dual colored, and they match perfectly with the other components of this watch.

I didn't know I needed to use the gunmetal stardust beads and the antiqued silver pewter spacer beads and the swirl toggle clasp until I sat down and placed the components alongside one another. Everything about this watch design - the colors, shapes, textures...all happen to be a beautiful contrast, but yet one and the same. Silver, black, and grey; just like the universe above and around us.

Thank you so much for reading. This Celestial Watch is currently available here.
Posted by Green Subjective at 10:44 PM No comments:

Green Subjective
Office Worker by day, Jewelry and Accessory Designer and Freelance Writer by night. I am owned by 2 cats. I need coffee and tea to function. First time mom. Lives in the Pacific Northwest.

Get Blog Updates in Your Email